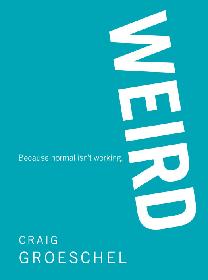 Click on the book above to go to the book on Amazon.

This was one of those books that I really wanted to love. As soon as I heard of it, I fell in love with the concept.

The Way of Jesus IS weird. It isn’t “normal.” And, the modern church and modern Christians have jumped through a lot of hoops over the last few decades to normalize the Gospel.

And Groeschel is absolutely correct: it isn’t working.

All we’re left with is a watered down Jesus and a few bland scraps of  news that isn’t even all that good. It’s “Eehh News,” but with cool graphic-tees and an iPhone app.

So, I was pretty psyched by the prospect of this book.

And, it started out great-guns.

But, the best way I can describe the book, is that it’s like one of those 8-week sermon-teaching series that sounds great, and starts great, but by the third week you realize that everything that needed to be said in this series has already been said…and what the heck are we going to do in the next five weeks?

So, here’s what I liked about the book:

I’d give the book 2-out-of-5 stars, just for the first two parts of the book. I really do think that those two sections are worth a read.

I also really think the book could have been 100 pages shorter and been better for it.

And, I’d also still like to have that cup of coffee with Pastor Groeschel.