The following is a reflection on Mark 5:21-43, the Gospel lesson appointed for Proper 8B, according to the Revised Common Lectionary.

Last year I wrote a book, going to hell, getting saved, and what Jesus actually says, and this post is an excerpt from pages 164-169. The storehouse at Fountain’s Abbey. Photo by Rick Morley.

In Mark 5:22-43, there are two different stories of healing woven together into a single story. While Jesus is on his way to heal and restore life to Jairus’ daughter, he heals a woman who has been bleeding for twelve years. Really, it’s one of those a-funny-thing-happened-on-the-way-to-bringing-a-woman-back-to-life stories.

Interestingly, at first glance, these two stories of healing couldn’t be more different.

The first major difference comes in the social standing and class differences of those to be healed. 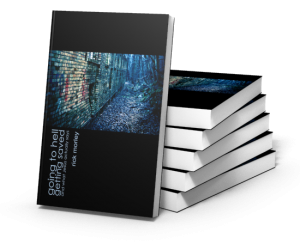 This post is an excerpt from my book, which is available in paperback and ebook at Amazon, Barnes & Noble, the iBookstore, blah, blah, blah…

In the case of the healing of Jairus’ daughter, Jairus is the leader of a synagogue. This was a pretty prominent position for someone to have, and it would have meant that he was at least somewhat wealthy, and certainly had a lot of power and influence in his community. The un-named bleeding woman, on the other hand, wouldn’t have had any power in the community whatsoever, mostly because of her gender. Women in those days were, for all practical purposes, at the bottom of the food chain. And, as if that isn’t enough, Mark tells us that through her twelve-year chronic illness, she spent all of her money on doctors, even though she only got worse. So after paying all her HMO copays she apparently doesn’t have any money left, but has rather been forced into poverty by her failing health.

The second difference has to do with how the healing comes about in the first place, and how these two people came into contact with Jesus.

Jairus, the powerful synagogue leader, came to Jesus just as a mass of people were gathering around him. Jairus publicly begged Jesus to heal his daughter; to lay his hands on her so that she may be made well and live. With Jairus’ role in the community, begging would not have been something that he would have been used to doing. In fact, he probably would have been more comfortable in the reverse situation: someone coming to him begging for mercy or charity. But, because of the desperation of the situation—his daughter is at the point of death—he casts aside all pretenses.

The bleeding woman, on the other hand, never once asks to be healed. She too is fairly desperate to get better, as she’s gone through all of her means to get better to no avail. But, instead of begging or asking Jesus for help and healing, she covertly—secretly—quietly—touches his clothes as he walks through a crowd. She reaches out to touch Jesus, and takes the healing without even asking. In fact, Jesus doesn’t even know who touched him, or who he healed, until in a few moments the woman comes clean. He knew that power had gone out of him, but to whom it went was at first a mystery.

The third difference has to do with the condition of the two sick people. The woman had been sick—bleeding—for twelve years. This was a chronic condition that had devastated her life and fortune, and worsened through the years. Jairus’ little girl has NOT been sick for twelve years. Her illness is apparently a sudden one, and one that became severe very quickly.

The final and most striking of the differences in the stories is that Jairus’ daughter dies before Jesus gets to her. Jesus arrives too late to heal her before death comes upon her. When Jesus goes into Jairus’ house, and when he reaches out to touch her and tells her to get up, Jesus doesn’t merely heal her per se; he raises her from the dead. This is a full-blown resuscitation. The woman who had been bleeding for twelve years though never dies. She’s still walking, talking, thinking, and moving when she approaches Jesus and claims her healing. She isn’t raised from the dead. She’s “just” instantly healed of a chronic condition.

The contrasts between these two little stories are many: rich, poor; powerful, powerless; asks for healing, takes the healing without asking; twelve-year-old girl with an acute and sudden illness, and a twelve-year-old chronic illness in a grown woman; a girl who is touched by Jesus and raised from the dead, and a woman who touches Jesus who is healed while still very much alive.

It’s quite clear that these two stories are very, very different. And yet, at their core—and at their most profound level—they are the very same story. They are, in fact, the stories of two people, who, when they came in contact with Jesus, were transformed from death to life.

As mentioned above, this is obvious in the case of Jairus’ daughter…she died. Everyone around her saw her breathing stop and felt her heart cease beating. When Jesus arrived on the scene with the little girl’s father, the weeping and wailing mourners had already begun their thing. But, undismayed, Jesus went in to be with the corpse; he reached out to her, touched her, took her dead limp hand in his, and commanded her with the word “egeiro”—“get up.”

Egeiro is used in each of the four Gospels to also refer to Jesus’ Resurrection.

On the morning of the third day, Jesus got up, and the tomb was empty. On the day that Jesus came to her, on the day of her death, she got up and lived once more.

This little twelve-year-old girl was quite amazingly touched by Jesus, and thereby brought from death to life.

It was the day of her salvation.

The life of the creature. The life was in the blood.

So, when you have a woman who has been hemorrhaging—bleeding—for twelve long years, she has, in the Jewish sense, been “losing her very life” for those twelve years. Life has been oozing out of her—seeping out of her. Like a toothpaste tube being slowly squeezed, she has been losing life for a long, long time.

In fact, you could quite rightly say, in the technical Old Testament sense, that for twelve long years this woman was dying.

So when she saw Jesus walking along the road with his entourage, and she squeezed her way through the crowd reaching out to touch his cloak, she was healed, and the blood stopped oozing out of her.

It was the day of her salvation.

I believe this text from the Gospel of Mark says something very important and very profound that goes far beyond the resuscitation of a twelve-year-old girl and the healing of a chronic illness. I believe that Mark wove these seemingly different stories together for a significant reason.

In my opinion, these miracles are God’s way of saying that the little twelve-year-old daughter of Jairus who died—is us. And the woman who had the very life draining out of her for twelve years, and who was, in a biblical manner of speaking, dying—is you and me.

Until we encounter Jesus. Until we are either touched by Jesus, or reach out and touch Jesus ourselves, then—and only then—are we delivered from death and given the sacred gift of life.

So, after looking carefully at this section from the Gospel of Mark, I find it reasonable to argue that it’s about salvation. It’s about life and death. It’s about being delivered from death, and given life in return. And it’s about Jesus’ role in that deliverance.