Ever catch someone in a moment of guilt? Been caught yourself? Of course you have. That’s what makes Jesus catching his disciples after arguing about who among them is the greatest so rich (Mark 9:30-37). They knew they shouldn’t be doing it! After all, Jesus had just been talking about the suffering that he was willing to endure on their behalf, and on behalf of the world. And here they are fighting over who’s “the best.” 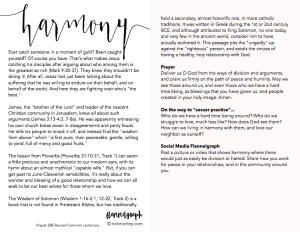 Click here for a PDF version of this flannelgraph

James, the “brother of the Lord” and leader of the nascent Christian community in Jerusalem, knew all about such arguments (James 3:13-4:3, 7-8a). He was apparently witnessing his own church break down in disagreements and petty feuds. He tells his people to knock it off, and instead find the “wisdom from above” which “is first pure, then peaceable,
gentle, willing to yield, full of mercy and good fruits.”

The lesson from Proverbs (Proverbs 31:10-31, Track 1) can seem a little precious and anachronistic to our modern ears, with its hymn about an almost mythical “capable wife.” But, if you can get past its June-Cleaverish sensibilities, it’s really about the wonder and blessing of a good relationship and how we can all seek to be our best selves for those whom we love.

The Wisdom of Solomon (Wisdom 1:16-2:1, 12-22, Track 2) is a book that is not found in Protestant Bibles, but has traditionally held a secondary, almost honorific role, in more catholic traditions. It was written in Greek during the 1st or 2nd century BCE, and although attributed to King Solomon, no one today, and very few in the ancient world, consider him to have actually authored it. This
passage pits the “ungodly” up against the “righteous” person, and extols the virtues of having a healthy, holy relationship with God.

Prayer
Deliver us O God from the ways of division and arguments, and plant us firmly on the path of peace and humility. May we see those around us, and even those who we have a hard time liking, as blessings that you have given us, and people created in your holy image. Amen.

On the way to “soccer practice”…
Who do we have a hard time being around? Who do we struggle to love, much less like? How does God see them? How can we living in harmony with them, and love our neighbor as ourself?

Social Media Flannelgraph
Post a picture or video that shows harmony where there would just as easily be division or hatred. Share how you work for peace in your relationships, and in the community around you.