Eastern Orthodox icons often depict John the Baptist with wings. Strange, right? He’s showed as a winged man, not because anyone thinks that he actually had wings, but because he was a “messenger,” sent to proclaim the coming of the Messiah. And, the Greek word for “messenger” is the 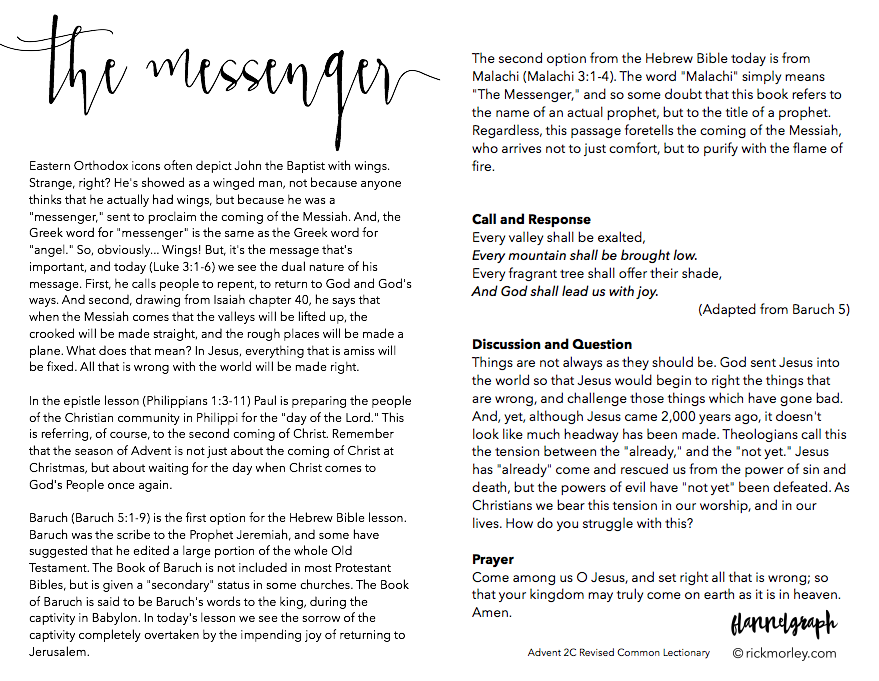 same as the Greek word for “angel.” So, obviously… Wings! But, it’s the message that’s important, and today (Luke 3:1-6) we see the dual nature of his message. First, he calls people to repent, to return to God and God’s ways. And second, drawing from Isaiah chapter 40, he says that when the Messiah comes that the valleys will be lifted up, the crooked will be made straight, and the rough places will be made a plane. What does that mean? In Jesus, everything that is amiss will be fixed. All that is wrong with the world will be made right.

In the epistle lesson (Philippians 1:3-11) Paul is preparing the people of the Christian community in Philippi for the “day of the Lord.” This is referring, of course, to the second coming of Christ. Remember that the season of Advent is not just about the coming of Christ at Christmas, but about waiting for the day when Christ comes to God’s People once again.

Baruch (Baruch 5:1-9) is the first option for the Hebrew Bible lesson. Baruch was the scribe to the Prophet Jeremiah, and some have suggested that he edited a large portion of the whole Old Testament. The Book of Baruch is not included in most Protestant Bibles, but is given a “secondary” status in some churches. The Book of Baruch is said to be Baruch’s words to the king, during the captivity in Babylon. In today’s lesson we see the sorrow of the captivity completely overtaken by the impending joy of returning to Jerusalem.

The second option from the Hebrew Bible today is from Malachi (Malachi 3:1-4). The word “Malachi” simply means “The Messenger,” and so some doubt that this book refers to the name of an actual prophet, but to the title of a prophet. Regardless, this passage foretells the coming of the Messiah, who arrives not to just comfort, but to purify with the flame of fire.

Every valley shall be exalted,
Every mountain shall be brought low.
Every fragrant tree shall offer their shade,
And God shall lead us with joy.
Adapted from Baruch 5

Things are not always as they should be. Some people always seem to prosper, and others always seem to struggle. People always seem to be hurting other people, and while we all say that we want peace we don’t always look like that’s what we want. God sent Jesus into the world so that Jesus would begin to right the things that are wrong, and challenge s that have gone bad. And, yet, although Jesus came 2,000 years ago, it doesn’t look like much headway has been made. Theologians call this the tension between the “already,” and the “not yet.” Jesus has “already” come and rescued us from the power of sin and death, but the powers of evil have “not yet” been defeated. As Christians we bear this tension in our worship, and in our lives. How do you struggle with this?

Come among us O Jesus, and set right all that is wrong; so that your kingdom may truly come on earth as it is in heaven. Amen.