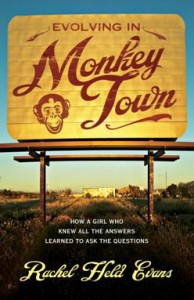 A good story is one that 1) conveys something important and 2) which is captivating due to tension, drama, comedy—or all three.

A great story is one where you find all of those things, AND you also find yourself in the story.

Rachel Held Evans first book (there’s apparently another on the way) Evolving in Monkey Town: How a Girl Who Knew All the Answers Learned to Ask the Questions is, for me, a great story. Because I’m in it.

Not literally of course. She’s probably never heard of me. (Though we are Facebook friends now, so we’re practically BFF’s…)

But, I do find myself peeking out every once in a while.

Her teenage years were lived in Dayton, Tennessee, the setting of the Scopes “Monkey” trial in 1925. But, even without the historical notoriety of Dayton, her “habitat,” as she titles the first part of the book, was saturated, at home, at church, at school, and in the larger community, within the conservative evangelical cultural soup of the south.

It was a community that exalted in having all the “answers,” especially as regards matters of faith. As she tells the story she didn’t have to figure much out in her faith, except the best ways to tell others, or more to the point, convince others that she was right.

But, with a precocious mind, the “answers” began to feel less and less trustworthy. With the awareness that her habitat shaped her religiously, came the realization that the habitats of others might shape them religiously.

Could everyone else with a different upbringing really all be going to hell? Was she the product of luck and fortune that she got to be in the “right” Habitat with all the answers? Or, is it just a little suspicious that her faith proclaimed to be the only right answer?

I didn’t grow up in the south, but I did grow up in Ocean City, a resort community that began as a Methodist retreat center. The main arteries in town are Wesley and Asbury Avenues. It’s still a dry island—which means no alcohol can be purchased anywhere within city limits. While reasonably secular today, it used to be Methodist Wonderland, and those roots are still visible. And those roots influenced my young, Methodist life very much.

I identify closely with Evans’ remark: “I felt closer to God as a teenager than at any other time in my life.”

And, I identify with the cracks in my porcelain faith that emerged as my faith matured-with the inevitable questions that rose to the surface like an army of bubbles.

After Part One, I like where this book is going. And I look forward to where I’m going to be going with it.

Because this story, is great.