The following is a reflection on Luke 3:7-18, the Gospel lesson for Advent 3C, according to the Revised Common Lectionary. This reflection is a selection from my book Going to Hell, Getting Saved. Madonna and Child from the Philadelphia Museum of Art. Photo by Rick Morley.

There’s a fantastic scene in the third chapter of the Gospel of Luke where we’re introduced to the wild-eyed prophet John the Baptist. Crowds gathered around him wondering if he was the One who was sent by God to save them and the whole world.

Luke tells us that John the Baptist greeted these curious onlookers who were coming to be baptized with these words:

Luke 3: 7, 9
You brood of vipers! Who warned you to flee from the wrath to come?…The axe is lying at the root of the trees; every tree therefore that does not bear good fruit is cut down and thrown into the fire.

Later he speaks of Jesus,

Luke 3:17
who is coming soon and whose winnowing fork is in his hand, to clear his threshing floor and to gather the wheat into his granary; but the chaff he will burn with unquenchable fire.Vipers. Wrath. Axe. Cut down. Winnowing fork. Unquenchable fire.

Then comes my favorite part:

Luke 3:18
So with many other exhortations, he proclaimed the Good News to the people.

I’m glad Luke cleared that up, because with all the axes, forks, and raging fires, I almost get overwhelmed by the “Good News” going on here. 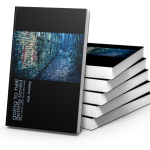 The post is an excerpt from my book, which is available at Amazon, Barnes and Noble, the iBookstore, etc. etc.

No one could accuse John the Baptist of being Mr. Sunshine. He meant business.

So, where was this Good News anyway?

Separation is actually a major theme of the Bible. The Creation story in Genesis chapter one is full of separations: light from darkness, waters above from waters below, dry land from water, day from night. In Exodus, there’s the separation of the children of Israel from the Promised Land, and the separation of the Red Sea to get them back to where they belong. In “Leviticus,” clear lines are drawn to separate ordinary things from unclean things, and holy things from everything else.

Our God is a God who separates. Injustice is separated from justice. Righteousness from unrighteousness. Holiness from evil. Light from the Darkness.

So the crowds, after being called a brood of vipers and threatened with axes and fire, ask: What then should we do?

In other words, how can we avoid being cut down and burned? If there’s going to be a separation, how can we end up being on the better side?

Lucky for the crowds, John has an answer:

Luke 3: 11, 13, 14
Whoever has two coats must share with anyone who has none; and whoever has food must do likewise…Collect no more than the amount prescribed for you…Do not extort money from anyone by threats or false accusation, and be satisfied with your wages.

So, to bear fruit worthy of repentance and maintain proper spiritual distance from absolute annihilation—be satisfied with what you have, and give from what you have with those who don’t have enough.

The Good News is that a King is coming—and He’s coming to inaugurate a Kingdom. And in this Kingdom people attest to the glory, and the power, and the majesty of God…by sharing what they have.

And those who don’t share with others are separated out and thrown into the unquenchable fire.

Now, before you think that this is a really, really bad rendition of a preschool teacher’s rant on sharing crayons, you have to read on in the writing of Luke to see how this is lived out. Luke also wrote the Book of Acts, which is the story of how the followers of Jesus carried on his ministry after his death and Resurrection.

Towards the end of the second chapter of “Acts,” we find a summary of how the first followers of Jesus lived:

Acts 2:42-47
They devoted themselves to the apostles’ teaching and fellowship, to the breaking of bread and the prayers. Awe came upon everyone, because many wonders and signs were being done by the apostles. All who believed were together and had all things in common; they would sell their possessions and goods and distribute the proceeds to all, as any had need. Day by day, as they spent much time together in the temple, they broke bread at home and ate their food with glad and generous hearts, praising God and having the goodwill of all the people. And day by day the Lord added to their number those who were being saved.

Everyone was in awe. Wonders and signs were being done. They were selling all they had and giving to the hungry, the thirsty, and the poor. They held things in common.

In other words, they shared with each other, and anyone who was in need.

Jesus was risen from the dead. Death couldn’t hold him down. The Resurrection power of God was working wonders in the world. And to testify to the amazing things that God was doing…they shared.

They shared. Jesus is risen.