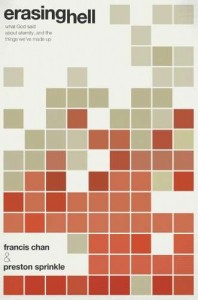 There’s a lot of conversation lately about heaven, hell, salvation, and damnation. As I’ve said before, I think that’s a very good thing. The church ‘at large’ is in the midst of an age-old conversation over how God saves, who God saves, and therefore the very character of God.

That’s not to say that the conversation is always going well. The “Rob Bell” Facebook fan page has degenerated–going from bad to worse. Mark Driscoll, during a sermon a few weeks back made a veiled reference to Rob Bell, said that some pastors are “going to hell.”

Francis Chan’s new book, Erasing Hell, is the next volume to be thrown into the ring. Like Mike Wittmer’s book Christ Alone, and Galli’s forthcoming God Wins, it’s clearly a direct answer to Rob Bell. And, Chan is, in my estimation, personally gentle to Bell, while fundamentally disagreeing with some of Bell’s biblical interpretation and a few of his conclusions.

The difference between some of the reactionary pieces that are springing out of the evangelical wing of the church and this book is that much of the others seem to merely prop up reformed evangelicalism’s soteriological doctrines, while Erasing Hell does some of that AND a lot more.

It also critiques reformed-evangelical Calvinism, and the transactional view of getting saved–though quite a bit differently than Love Wins does this.

He wrote the book to prove the existence of a fiery hell. On that point, I really didn’t need convincing, so maybe that’s why I found the opening to be a little hollow. For those who aren’t convinced in the existence (and nature) of hell, it will be interesting to see the reaction(s) to this book, and Chan’s attempt threading the needle with brutal honesty and humility. And, for those who have a very hard time inserting poverty, racism, and how we treat our brothers and sisters into a conversation on salvation, this book will be bitter-sweet.

Wherever you’re ‘at’, if you’re interested in following the salvation-damnation conversation that’s going on in the church and in society at large, this book is required reading.