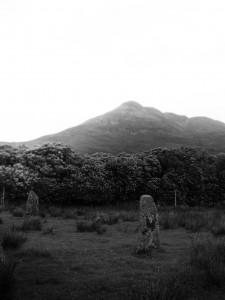 A few stones of the standing stone circle of Lochbuie on the Isle of Mull in Scotland. Photo by Rick Morley.

Last summer my parish had an evening discussion group (wittily titled “Caffeinated Theology”) which looked at “The Kingdom Experiment,” by The House Studio. The concept was simple enough–each week you look at one of the beatitudes, and then choose an “experiment” through the rest of the week to explore living some aspect of the beatitude in question.

I think the week was “blessed are the poor,” because for my experiment I chose sleeping on the floor–like most of the world’s poor do. I’ve done quite a bit of hiking and camping in my life, so I didn’t think it would effect me too much.

I could never get comfortable. I woke up in the night often. I had a hard time getting back to sleep. My hips hurt. My shoulder blades hurt. The back of my head hurt.

But, maybe the worst part was that I felt the effects throughout the day.

I realize that as I write this, I’m saying it like it was a bad thing. I actually tried to use those painful moments to repeat the week’s mantra, “blessed are the poor.” If nothing else, the events of the week helped keep that verse in my thoughts and mind repeatedly. Constantly.

With every throb and wincing joint I was reminded of God’s blessing. And who God blessed.

So, when I hear that Jacob laid down one night and cuddled up with a rock…it takes me back and makes me wonder…how good did he sleep that night? And, for how much of the following day and week did he ‘feel’ it.

Did it help infuse the following day, and week, and month, and lifetime with the life changing events of the night? Did that rock help with constant reminder?

Could he feel the blessing of God in his joints, and shoulder blades, and skull?

For on this night he saw angels. And he heard the voice of God, as his forebears had before him–and as his son Joseph would in dreams–and as his distant descendent Moses would in a bush.

God reminded him of His relationship with his father and grandfather. He reminded Jacob that He would bless the world through him. He told him that his family would “be like the dust of the earth.”

Wow, what a statement.

There, lying on the dust of the ground, perched on a rock, Jacob was told that his family would be like dust. They would be everywhere.

And God would never leave Jacob. Wherever Jacob went God would be with him.

As he awoke from his slumber, Jacob picked himself off of the dust of the ground. And–surely–still feeling the spot on his skull where his head met the earth for the night, he realized that he was near the House of God–Beth El–and by God’s gate.

And there Jacob put up a pillar, another rock, to signal to anyone else who would stumble by that spot that they were on holy ground.

I’m struck by the earthiness of this passage. This blessing wasn’t ethereal. “Spiritual.” It was a blessing born on a rock. A blessing of dust. More rocks piled high. It was a blessing of families, babies–children, young and old, growing into mothers and fathers who would be blessed with more children. Until the world was covered with the dust of God’s blessing and favor.

Almost makes me want to sleep on the floor again tonight. I want to feel the ache in my skull again. I want to be reminded of God’s blessing, and who He blesses.