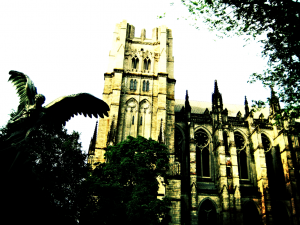 A "lomo" rendering of the Cathedral of St. John the Divine in NYC. By Rick Morley.

A reflection on Genesis 29:15-28, the Old Testament lesson from the Revised Common Lectionary for July 24, 2011. I also have a reflection on the Gospel lesson of the same day.

Seven whole years of his life had been spent working to earn the right to marry his beloved. And then after being tricked into marrying the wrong girl, he had to work seven more years.

Fourteen years to marry the woman he loved.

And yet…it’s not like Jacob is just an innocent victim here. Remember why he had run away?

He lied to his father Isaac, who was elderly and nearly completely blind, tricking him into believing that he was his older brother Esau. And with that lie, Jacob stole the blessing which, by birth order, belonged to his older brother.

He crushed his brother. And his elderly, blind father.

Jacob was swindled out of fourteen years of his life by an uncle–but he had stolen something much, much more valuable from his brother.

And, in the end, Jacob got what he wanted–thank goodness for polygamy. (?) The family-values of his society allowed him to eventually marry Rachel, his dear one.

Esau, on the other hand, was forever left out of the blessing that was due to him. There was no second chance for him.

And, (again, hopefully in smaller ways) how many times have we betrayed others? We’ve all lied–in big ways, and small ways.

Some of us are still liars. Some of us live a lie every day.

The stories of the patriarchs are so rich because there is so much drama, most of the time created by themselves. They read like a soap opera–and when our foremothers and forefathers told these stories generation after generation, they served as soap opera.

On one level, as I’ve been saying about a lot of the lessons from the patriarchs this summer, these stories serve as a reminder that God can work through clowns, and failures–and even liars. And, that’s good news, because sometimes our lives dangerously mirror theirs.

But, on the other hand this story serves as a searing reminder of my own failures. My own lies. My own sins.

But, that doesn’t take away the sting of betrayal that I’ve caused people I love—and innocent bystanders. For while some of the hurt I’ve caused in my life was able to be eventually covered up like Laban’s lie to Jacob, some of the hurt still festers somewhere in the cosmos, like poor Esau—who lost everything. Forever.

Does this passage serve as a mirror for you? Who do you identify with here?

You might might also want to read other, similar, posts of mine:
a rocky night
hair and heals
I’m a mess too
railing into the night