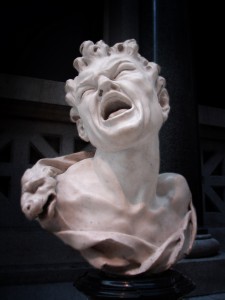 Bust of Marsyas by Balthasar Permoser (1651-1732), at the Metropolitan Museum of Art. Photo by Rick Morley.

A reflection on Matthew 14:13-21, the gospel lesson for July 31st according to the Revised Common Lectionary. There is also a reflection for the Old Testament lessons for this same day here.

He had just received word that John the Baptist was dead. Beheaded.

Their families were close. Their mothers had gotten together when they were pregnant with each of them. They were both servants of God, sent to preach the Good News.

Jesus had been baptized by him.

And now he was gone. And it was a grizzly end.

Jesus’ reaction is the same reaction that many of us might have when we hear such news: we retreat. We need some time alone to process it. To weep. To pray. To remember times gone by—better times.

But, the draw of Jesus was so magnetic, he couldn’t really get away. Someone had seen where he had gone, and he tipped the crowd off. And the crowd followed.

Perhaps the crowd didn’t know what had happened. Maybe they hadn’t gotten the news yet. Maybe they didn’t know that the news had effected Jesus so deeply, or that such news would even phase such a wise teacher like Jesus.

Matthew doesn’t give us all the details here, but I suspect that the latter option is the right one.

I suspect that because when I’m in despair it’s hard for me to see the despair of another too. All I can do is see the hurt that’s inside of me.

But, that’s not how Jesus operates.

But, he was moved with compassion. He always is. He was able to see beyond his own pain, and feel the pain they were bringing.

And so he healed them. And when he was done healing them, he fed them.

This passage shows so beautifully the humanity and divinity of Jesus. Mourning and grieving, and yet offering healing and life at the same time.

Like manna from heaven, he is always enough, day by day.

What do you do with your grief and despair? How has Jesus looked on you with compassion?